Four Things You Didn’t Know About the
New Ambassador 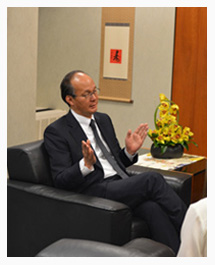 Throughout his long career with the Ministry of Foreign Affairs, Ambassador Reiichiro Takahashi has certainly seen the world. His diplomatic career has brought him into contact with many unique cultures, and he made many friends along the way. These personal relationships seem to be the key to understanding his approach to diplomacy. The Ambassador strongly believes that only by truly getting to know people on an individual basis are we able to avoid the pitfall of stereotypes.

We sat down with Ambassador Takahashi the other day to learn a little more about him beyond what appears on his resume.


Here are four things you don't yet know about him...