With its beautiful natural scenery, rich culture, and bustling cities, Japan has always been a natural tourist destination. Currently, however, Japan is experiencing a tourism boom, as more and more people are choosing to travel to the land of the rising sun.

In 2013, Prime Minister Abe achieved his goal of bringing in 10 million foreign visitors for the year. By 2014 the number of visitors to Japan reached 13.4 million, more than twice the amount that had visited in 2011.

The World Economic Forum’s Travel and Tourism Competitiveness Index for 2015 sheds some light on these numbers. The index ranks 141 countries on their travel and tourism competitiveness based on factors such as the business environment, safety and security, and cultural resources. Japan came in at number 9 out of 141 countries this year, up 5 spots from its position in 2013. Japan was particularly praised for its treatment of customers, ranking number 1 in that category, which will come as no surprise to those familiar with Japan’s world-class reputation for hospitality, or omotenashi.

Tourists are visiting from all over the world, including the United States and Europe, but the greatest numbers are coming from Japan’s neighbors in Asia. Rising incomes and an expanding middle class in many East Asian societies are thought to be contributing to the increased demand for travel opportunities.

More for Your Money 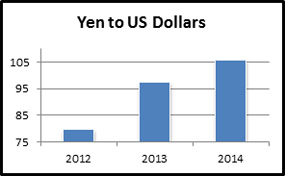 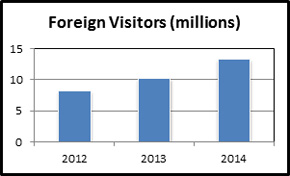 
Americans are finding it a particularly apt time to travel to Japan, as Japanese goods and services are considerably more affordable now than they were a few years ago. For example, the basic price for a one-way unreserved bullet train ticket from Tokyo to Kyoto is ¥13,080. In April 2015, the exchange rate was about 119 yen to the dollar, making the cost of this ticket approximately $110 US dollars. In 2012, however, ¥13,080 was equivalent to about $164 on average, a $54 difference.

The depreciation of the yen is thought to be a major impetus for the boost in foreign visitors. The fact that the US dollar has risen considerably against Japan’s currency since 2012 has benefited not only Americans, but also tourists coming from countries like China, where the local currency is closely tied to the US dollar.

Another piece of good news for travelers’ wallets is the expansion of tax-free shopping for foreign visitors. The scope of tax-free goods was broadened last October to include not only durable goods, like clothing and electronics, but also food, pharmaceuticals and cosmetics. The government intends to double the number of tax-free shops in Japan to 10,000 by the year 2020.
Ease and Accessibility

As Japan welcomes more and more visitors from around the world, the government is actively working to improve ease and accessibility by simplifying both the entry process and travel within the country. Japan has recently loosened visa requirements for tourists coming from several Southeast Asian countries, and there is an initiative to make more guides and signage available in multiple languages throughout the country. The Abe administration has also placed a renewed emphasis on drawing tourists to Japan’s rural areas, which typically receive less traffic than major cities and landmarks. To this end, many rural towns are expanding access to free public wifi, so travelers can stay connected on the go.

This tourism boom is expected to continue over the next few years, and the Prime Minister has set the ambitious goal of 20 million foreign visitors by 2020. That is the year that Japan will be hosting the Tokyo Olympics and Paralympic Games, which will undoubtedly provide further opportunities for growth.