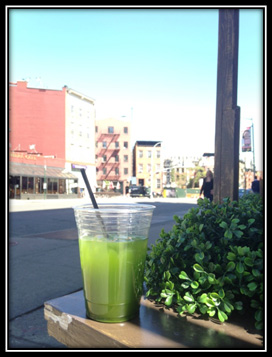 Matcha, the powdered green tea enjoyed in Japan for centuries, is currently taking New York by storm. Lately, matcha lattes are finding their way onto restaurant menus, and cafes dedicated to the bright green drink are popping up around the city. With its vivid color ripe for photo sharing, and its rich, slightly bitter flavor, matcha is an unrivalled drinking experience.

Although matcha has been available at tea shops and Japanese restaurants around the city for many years, it is now experiencing an unprecedented boom. On a recent Sunday, a matcha specialty café in the West Village was bustling, as a steady stream of customers dropped in to order a variety of matcha-infused beverages, including espresso-like shots in tiny glasses and iced tea.

Two New Yorkers, James Parvin and his girlfriend Heather Caster, sat by the window enjoying almond matcha lattes. Heather, a design professional, had passed by the shop a few months ago and wondered, "What is this matcha thing?" The two have been coming to the café regularly since then, and have even started making their own matcha lattes at home, with powdered green tea and almond milk. James, a producer, had first tasted the beverage on a business trip to Japan, but knew little about it. Now, it’s the first thing he drinks in the morning, before his coffee. Heather has almost completely replaced coffee with matcha. They both enjoy the boost they say they get from it, a caffeine buzz that lasts longer than coffee, without the harshness.

To create matcha, tea leaves are ground into a fine powder and whisked into hot water, rather than simply steeped and removed. Therefore, matcha drinkers are consuming the leaf itself, said to be rich in antioxidants. The drink is heralded for allowing the drinker to be both alert and calm, due to a combination of caffeine and an amino acid called L-theanine, reported to produce calming effects without drowsiness. 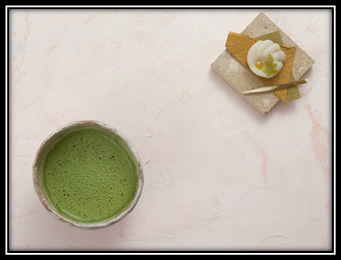 Many New Yorkers who enjoy the rich flavor and health benefits of matcha, however, may not be aware of its rich history. In Japan, matcha is known for its use in the tea ceremony, a centuries old tradition. Within the rustic, sedate tea house, Japanese tea masters carefully prepare the beverage. A scoop of fine green powder is whisked into hot water in a ceramic tea bowl with the utmost care and precision. Guests similarly enact their role in the ceremony, raising the bowl to their lips with both hands and drinking the foamy green liquid in a refined, elegant manner. Today, matcha is also a popular flavoring in many Japanese sweets and snacks, from ice cream to cheesecake.