Have you ever heard of suikawari? It's a fun Japanese game that ends in a sweet summer treat! 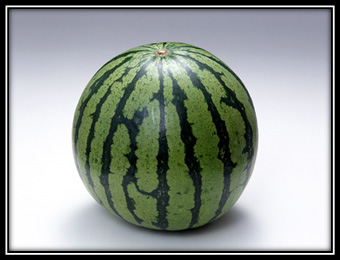 If you've ever smashed open a piñata at a birthday party, suikawari will sound familiar. Instead of breaking open a papier-mâché donkey to get to the candy inside, however, you crack open a watermelon. On a hot summer day, that juicy pink watermelon is a lot more refreshing than some half-melted candy!

In suikawari?, which literally means "watermelon cracking," players are given a stick, blindfolded, and spun around. A watermelon is placed on the ground in a wide-open space, such as the beach or your backyard. 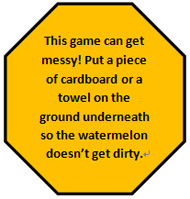 Everyone watches and yells out instructions to the blindfolded person in search of the watermelon to break it open with the stick. Each person gets one try, then has to pass the stick to someone else. The result: pieces of tasty watermelon for everyone to enjoy.

We know from historical records that watermelons have been grown in Japan since at least the 1600s, but there are many different stories about when the watermelon cracking game first started. Some people think that the game developed from performances in which fruits and vegetables were slashed open with swords. Whatever the origin, many Japanese today have happy summer memories of breaking open watermelons at the beach when they were kids.