Every year, bright young people from around the world come to Japan to teach English at local schools and participate in cultural exchange. The program, known as the Japan Exchange and Teaching Program, or JET, was started in 1987 with 848 participants from 4 countries. Today, it is one of the largest exchange programs in the world. In 2014 over 4000 JETs were residing in Japan from 42 different countries, more than half coming from the US. JETs are placed throughout Japan, from major cities like Tokyo and Osaka to small rural villages. 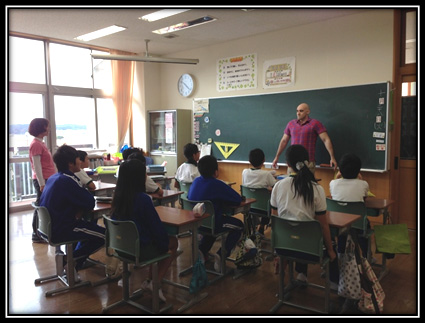 Monica Yuki, Country Representative for the JET Alumni Association USA (JETAAUSA), explains that the role of a JET goes far beyond language education. Especially in small towns, many Japanese students only know about America through movies or pop culture. The JET program gives these students a chance to form personal relationships with native English speakers and hear firsthand about their lives.

New JETs are able to prepare for the experience through a pre-departure seminar led by former JET participants that focuses on practical issues such as social etiquette and money management. After arriving in Japan, JETs are given a full orientation in Tokyo before they disperse to the cities and towns where they will be living and working for the next year or more.

For many JETs, their placement becomes their "Japanese hometown," Monica explains, a place they feel a special connection with long after they return to their home countries. Monica was once a JET in the small city of Iruma, about 20 miles outside of Tokyo. She was warmly welcomed by the community there, even waking up one morning to find a basket of sweet potatoes on her doorstep from a friendly neighbor.

By exposing participants to parts of Japan that are off-the-beaten-track, the JET program creates "hyperlocal connections" to areas that are not well known outside the country. JETs often invite friends or family to visit them, introducing their "Japanese hometown" to a new audience. As the Japanese government seeks to draw foreign tourists to lesser-known destinations around the country (see Japan Welcomes the World in this issue), the JET program can be seen as one way of contributing to this process.

While there are other organizations that offer opportunities to teach English in Japan, the JET program is unique in the support system it provides for its participants. The Association of JETs (AJET) has branches in each prefecture which organize activities and events for JETs and serve as a vital resource if a JET is feeling homesick or facing difficulties.

JETs returning to the US are supported by a network of JET Alumni Association chapters around the country, including an active New York Chapter. When Monica Yuki returned from Iruma, she found the JET Alumni Association of New York to be a great help in readjusting to life in the States. JETAANY, which currently boasts over 2,000 members, provides returning JETs with an instant group of friends who share this unique experience in common. Monica became so involved with the alumni association after her return that she became a part of its leadership for the next ten years, four of which she served as President.

In addition to planning events that foster greater understanding of Japan, the New York Chapter of the alumni association helps former JETs with important workplace skills as they begin the next step of their journey. Many JETs were recent grads before entering the program, and benefit greatly from workshops offered by JETAANY that teach how to craft a resume and hone networking and interviewing skills.

Former JETs often go on to work in Japan-related fields or continue their studies in graduate school. Whatever course they take, they have developed invaluable skills, adapting easily to new environments and approaching their work with an international outlook. JET participants have not only enriched the lives of those they encountered in Japan, but their own lives as well.