Covering Up
To many Americans, the sight of a surgical mask conjures up unpleasant memories of their last trip to the dentist. So it’s no surprise that a New Yorker may be confused, or even alarmed, to encounter someone on the street or subway wearing a white mask over their nose and mouth. In Japan, however, this is a common sight.

Many Japanese wear face masks to avoid catching a cold, or to guard themselves from airborne pollen that triggers hay fever. Some people also wear masks out of consideration for others, if they are already sick and want to avoid passing on their own germs.

Face coverings, like surgical masks, can provide the wearer some protection from inhaling or emitting infectious droplets. Especially when worn correctly, covering both the nose and mouth, and when combined with other precautions, such as proper hand-washing, face masks can be a good defense during cold and flu season. It is important, however, to remember to replace your mask frequently, especially after coughing or sneezing into it, since the humid environment could easily encourage germs.

Just Good Manners
The practice of wearing a surgical mask in public first became widespread in Japan in the early 20th century, when an influenza pandemic swept around the world, killing over 20 million people. The masks were brought out again during subsequent influenza outbreaks, as well as after natural disasters when the air was contaminated with dust and ash. Nowadays, slipping on a mask when you have a cold or the flu is simply seen as good manners, similar to covering your mouth with your hand when you cough. Masks have become popular not only in Japan, but in other East Asian countries like China and Korea as well.

While early face masks were made of cotton, and were meant to be washed and reused, most masks in Japan today are disposable and made of nonwoven material that can better defend against tiny particles. There are two main varieties – pleated masks that lay flat against the face, and three-dimensional masks that pop out from the face, meant to make talking and breathing slightly easier. 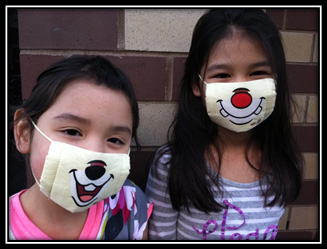 Lately, however, masks in Japan have transformed from merely a health precaution to a fashion accessory. Masks can be found in an array of stylish colors and patterns aside from the clinical, classic white. Dots, flowers, and even cartoon characters’ features adorn many of the face masks sold today. Some Japanese women throw on a mask on the way to the grocery store if they haven’t had time to put on makeup. Other people choose to wear masks in the winter to keep their nose and mouth warm, rather than piling on scarves.

There may be another reason to put on a face mask, as well. Just as many New Yorkers can be found on the subway plugged into their headphones to block out the world, some Japanese teens say they wear masks to avoid interacting when out in public.